The Regression analysis implements a multiple linear regression model. The analysis aims to model the relationship between a dependent series and one or more explanatory series. Several models can be specified within one instance of the analysis. The output consists of the coefficients of the linear model, the predicted series and several statistical indicators. If there is sufficient data after the end of the estimation sample range, forecasts can be calculated.

The Regression analysis attempts to find the linear combination of a number of explanatory series that best describes a dependent series.

The analysis uses the following model:

where y is the dependent series and x_i are the explanatory series. If the option “No intercept” is selected, then the constant α is not included in the model.

The parameters α and β are estimated by minimizing the sum of the squared residuals ϵ. This is known as Ordinary Least Squares (OLS). The output from the analysis will include the predicted series calculated using the estimated parameters.

The automatic estimation sample range will be the largest range where there is data for all series. You can specify a smaller range if you like to limit the data to be used in the estimation. 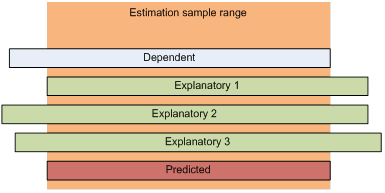 The Regression analysis automatically generates a report, which includes variety of statistical information.

The calculation range used for the analysis.

The number of observations used in the analysis. This includes all observations in the calculation range where there are values for all series.

The number of observations minus the number of dependent series and minus one for the constant parameter.

Compares the variance of the estimation with the total variance. The better the result fits the data compared to a simple average, the closer this value is to 1.

The p-value is the probability of obtaining a value of F that is at least as extreme as the one that was actually observed if the true values of all the coefficients are zero.

The sum of the square of the residuals.

The square root of the sum of squared errors divided by the degrees of freedom. This is an estimate of the standard deviation of residuals.

The square root of the sum of squared forecast residuals divided by the number of residuals.

The Durbin-Watson is a test statistic used to detect the presence of autocorrelation in the residuals. The value is in the range 0-4. A value close to 2 means that there is little auto correlation. The result from this test is not useful if any dependent series is included with several lags or if no intercept is included in the model.

The information criteria are measures of the expected information loss. A lower value means that more information is captured. This can be used to compare models when the same data is used in the models.

The standard error of the estimated parameters

The estimated coefficient divided by the standard error

When there are data for all the explanatory series beyond the estimation sample, we can use the estimated parameters to calculate forecasts. This is done by checking the option “Calculate forecast”. If no end point is specified, the analysis will calculate as many forecasted values as possible. You can specify an end point if you want to limit the length of the forecast. 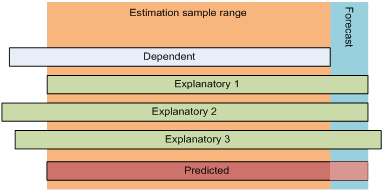 Dynamic forecasting uses the data generated by the model as input to the model to calculate additional forecasts. In this example we have included an explanatory variable that is a lag of the dependent series. 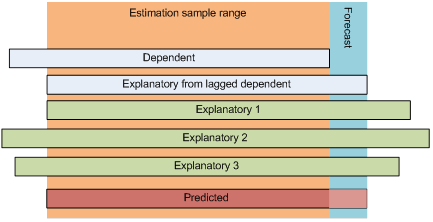 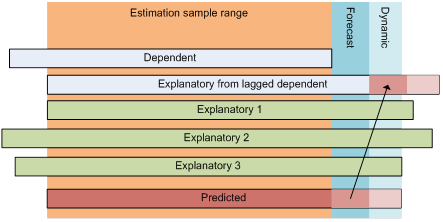 There is one special case to be aware of. If all the explanatory series are lagged versions of the dependent series, you can use dynamic forecast on the series infinitely many times. In this case you must specify an end for the forecast since there is no way for the application to know when to stop.

You can define one or more regression models. Each model has separate settings. When a new model is created, the settings of the current model are duplicated. Models can be renamed and deleted.

Select this option to include the dependent series in the output.

Select this option to include the explanatory series in the output.

Specify the limits of the estimation sample range. The default range will be the largest range where there is data for all the series.

When this option is selected, the constant α is omitted from the model and it will be defined as:

When this option is selected a series containing the residuals will be included in the output.

By selecting the option Uncertainty band, two additional time series will be calculated. These time series form a band around the predicted values by adding and subtracting a number of standard deviations. The standard deviations is the measurement Standard error of regression, as described in the section Report above.

Forecasts will be calculated only if this option is selected and there is sufficient data, as explained in the section Forecast above.

In the special case when dynamic forecast is enabled and the model contains only lagged versions of the dependent variable, a limit must be specified.

Allow the use of predicted values of the dependent series when calculating forecasts.

Select if you want to include this series in the model.

Select which series is the dependent series. This must be specified.

By selecting Diff, the first order differences of the series will be calculated. The result will then be converted back to levels. First order of differences means that the series is transformed to "Change in value" (one observation) while expressing the result in levels.

Here you specify the lags you would like to include for a specific series. When lagging a series, the values are delayed in time and the series stretches further into the future.

If you for example set “Lag from” to 0 and “Lag to” to 2 three series will be included, one series with no lag, one with a lag of 1 and one series with 2 lags. This will automatically change the lag range to “0 to 2”. You may specify the desired lags using Lag to/from or Lag range, the result will be the same. If you set Lag range to a single digit or set Lag to and Lag from to the same value, a single lagged series will be included.

In the Regression analysis, we first defined the variables of the model, by:

In the regression analysis, we checked as output both the dependent and explanatory variables. Both series, as well as the predicted series, will be needed in the Scatter Chart to show one week change in both in indices.