You need to have Macrobond 1.2.2 and EViews 7.2 Enterprise Edition (Apr 29, 2011 build) or later. If you are running the 64-bit version of EViews, you need the 64-bit version of Macrobond. Note that only EViews Enterprise Edition can connect to external data sources - other versions of EViews won't be able to connect due to EViews restrictions regarding 3rd party vendors.

This API can be used only with Legacy or Data+ license.

The first time you start EViews after installing the required versions of both Macrobond and EViews, you will be asked if you want to register the Macrobond add-in. To be able to use the add-in, you should answer Yes to this question 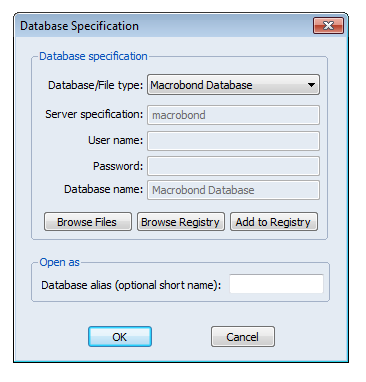 To open the database, just press OK in this dialog

The Macrobond add-in  by default registers automatically but in case it fails, you can manually register add-in for EViews by executing this command in EViews:

You can unregister the add-in with this command:

You can add series to the list of series presented in the Macrobond database window in EViews by pressing the Browse or Browse-append buttons. These commands will display the Macrobond 'Select time series' dialog: 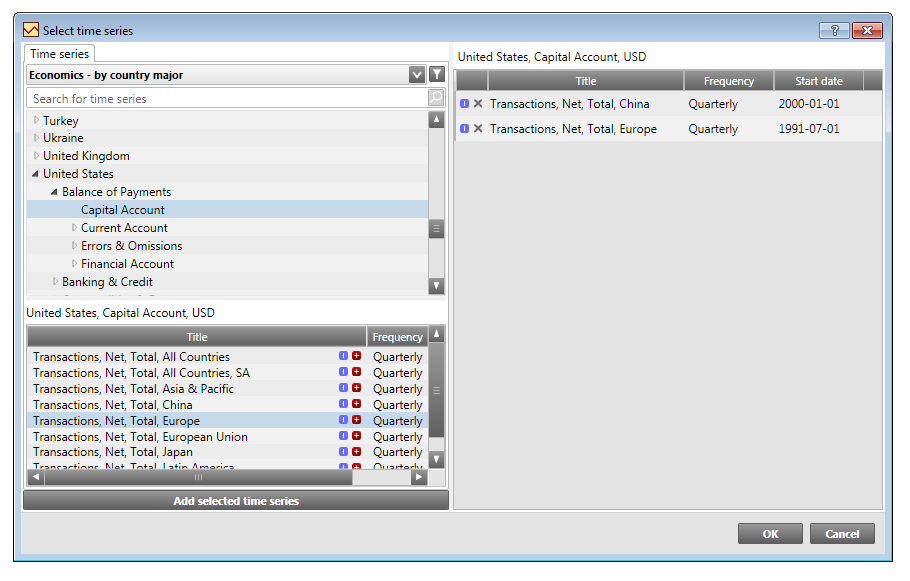 You can pick one or more series to add to your database view in EViews.

You can now work with these series like series from any other external data source in EViews. The most common operation is to export them to a Workfile. You can do this from the Object or context menu in EViews.

You can store time series in EViews to the 'Account in-house database' in Macrobond. The time series will then be available in the Macrobond application.

If more information is required in order to store the series in Macrobond, a dialog like this will be displayed: 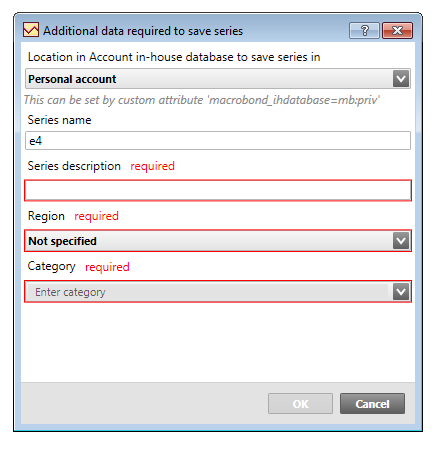 When all information is filled in and you press OK, the series will then be stored.

In order to avoid this dialog, which is useful when automating tasks, you can complement the series in EViews with some additional attributes: Name, Macrobond_category, Macrobond_region, Macrobond_ihdatabase. See section Labels below. No dialog will be displayed when all these attributes are present.

In EViews you can specify these attributes in the View|Label view of a series: 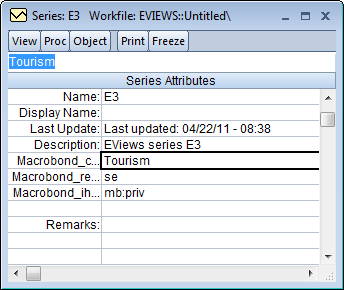 Note: You enter new labels on the empty line above the 'Remarks:' label.

You can see hints for these attributes in the dialog where you enter complementary series information: 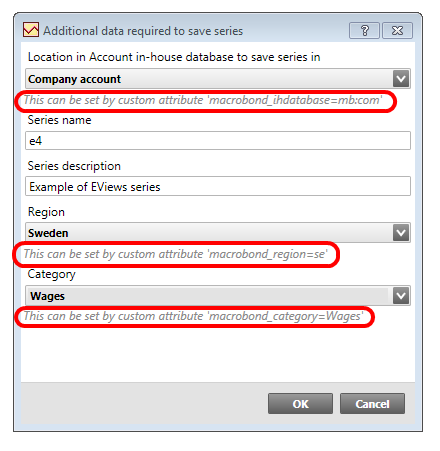 If you have the Macrobond application running when you save a new series to the Macrobond database in EViews, you might need to press the refresh button in Macrobond in order to see the new series in the list.

The following labels are used by the Macrobond add-in:

You can use commands in EViews to download series from any source, including Macrobond. Assuming that you have defined a database alias called 'mb' for the Macrobond database, you can use a command like this:

In order to be able to update the series in the workbook you need to create a link:

If the Macrobond series name contains spaces, you need to put the identifier within quotes. For example, to download a series from Bloomberg:

To store a time series you use the EViews 'store' command, which works in a similar way to 'fetch':

To set labels, you use the 'label' function: